Rudyard Kipling is forever remembered for his great writings on India, and his characters have become familiar to billions around the world. Little is known of his father and his successful career in the Punjab in India.An exhibition, titled Lockwood Kipling: Arts and Crafts in the Punjab and London, explores the history of the museum’s collection through his life, and includes paintings in the Indian section of the Great Exhibition of 1851, his sketches of Indian craftspeople, his book of illustrations and furniture designed for royal residences.

On returning to England in 1893, he and son Rudyard often collaborated. The exhibition includes a terracotta tobacco jar designed and made by Kipling in the shape of a bear, inspired by their shared time in India.Rudyard wove his father’s vivid collections into his stories, many of which Lockwood Kipling illustrated. The exhibition includes a range of these editions, including The First and The Second Jungle Book and Kim.

Door from late 19th century India was featured in a new exhibition on Lockwood Kipling, the father of author Rudyard Kipling, at the Victoria & Albert Museum in London  The exhibition concludes with furniture and designs relating to royal commissions that Kipling worked on with his student, the architect Bhai Ram Singh – the Indian billiard room for the Duke of Connaught at Bagshot Park in Surrey and the Durbar Hall at Osborne, Queen Victoria’s summer home.

The great wealth that flowed from the fields of India into the fancy rooms that were set up in the United Kingdom in that century were phenomenal. Many a fortune were gained and lost in the nineteenth century between India and its rulers. The cultural ties that evolved over the centuries continue today in many common words and language and traditions. There is much that was learned and can be used to build upon as Brexit will allow the UK to seek independent alliances, with its commonwealth of countries. India as the jewel in that crown, can play an important role in helping to develop trade with other countries, with the British.

Our common colonial heritage can help to forge new relationships from the old, as there is much to build on. Britain may have a better alignment with India and its huge market than with Germany or France. Africa the next big continent is just waiting for more trade and development, and common ties and language can help.  We can help architect the next Hall for an African head of State, while building the economy of the continent, through economic collaboration. 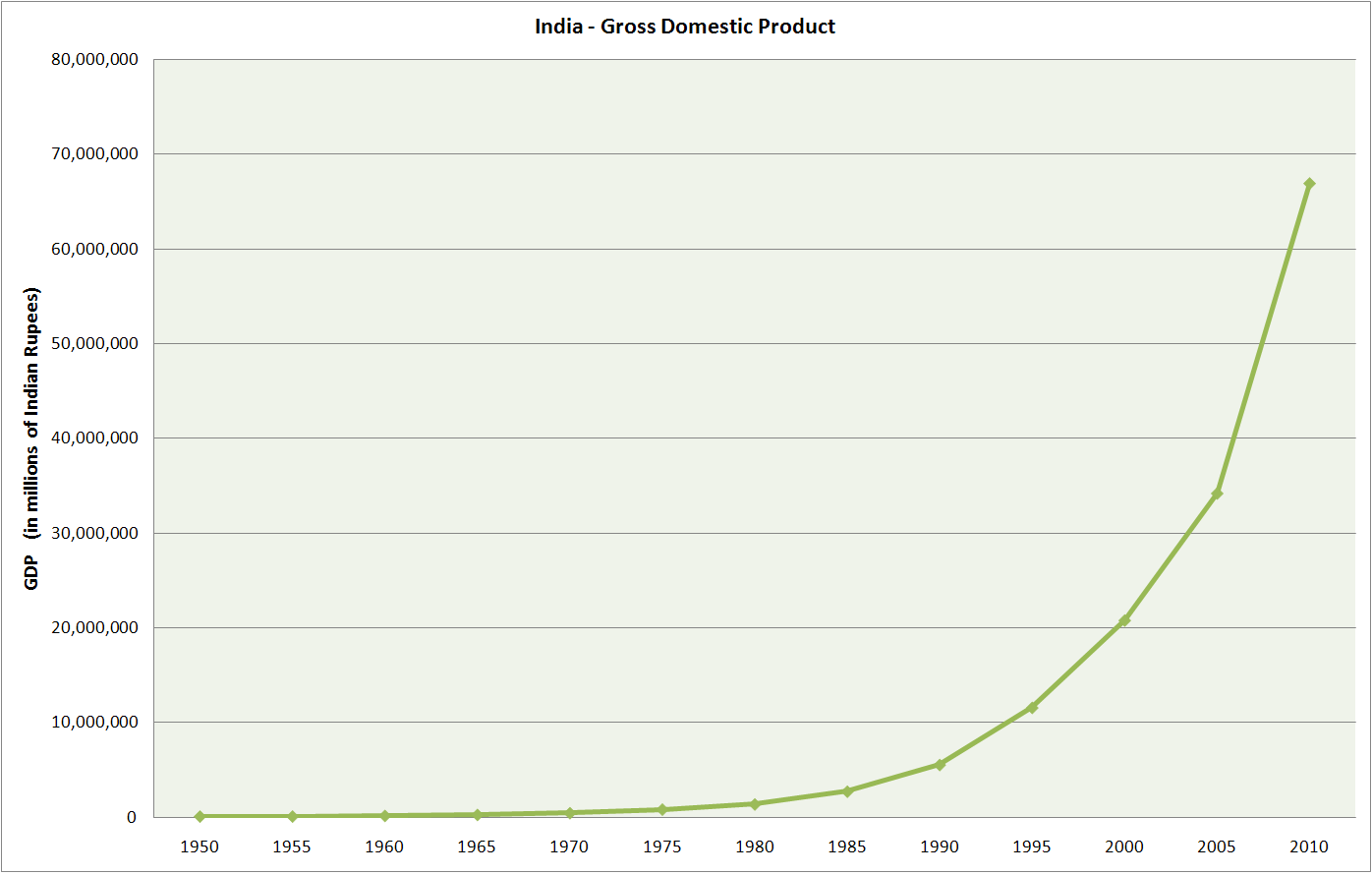 Indian GDP growth has picked up, as is clear from the chart and will continue to grow. Unfortunately “in 2011, Transparency International ranked India at 95th place amongst 183 countries in perceived levels of public sector corruption and in 2014, India saw a reduction in corruption and improved the ranking to 85th place. India’s absence rates are one of the worst in the world; one study found that 25% of public sector teachers and 40% of government owned public sector medical workers could not be found at the workplace.” The new government has taken numerous steps to remove corruption and increase its ability to deliver money directly to its citizens, thereby avoiding all middle men.

Arun Jaitley the Finance Minister of India tried to explain the recent de-monetization and other governmental actions, “Expenditure required for poverty eradication, national security and economic development have to be compromised with on account of tax non-compliances. For seven decades the Indian “normal” has been to undertake transactions partly in cash and partly in cheque. “Pucca” and “Kachha” accounts are a part of the business language. Tax evasion has been considered as neither unethical nor immoral. It was just a way of life.” At the height of this national tax avoidance mind set, tax avoidance became the most exacting science in India; as in 2015, only 24 lakhs (2.4 million out of a billion) declared income above Rs.10 lakhs ($ 15,000).

He went on to explain with the deposit exceeding 12 trillion rupees, “Not only has the money lost is anonymity, it’s owners, after being taxed, are entitled to put it to more effective uses. The size of the banking transactions and consequently the size of the economy is bound to increase. In the medium and long run, the GDP would be bigger and cleaner. Money entering into the banking system and officially transacted would give an ample scope for higher taxation – both direct and indirect. The Centre and the State Governments would both stand to gain. The economy would also be serviced by both cash and highly digitized transactions.”

He continued, “The Prime Minister was being futuristic, and thinking of a more modern, technology driven cleaner economy. He is now speaking of cleaning the political funding systems. His opponents want a cash dominated, cash generating and cash exchange system to continue”

I agree largely with the intent of the Benami Act to stop corruption and the various other measures like De-Monetization; and use of Pan and Adhar or electronic IDs, to facilitate digital payments. Modernization at the source will increase transparency and increase usage of the modern banking and digital economy. With reform of the indirect taxation later with GST, taxation at the sales points will be easier to enforce, and unite the nation under one law. The foundation of India as an economic powerhouse is being carved out anbd new paths beiung laid out for its economy. The new laws are being enforced, to drive the spending of vast amounts of money, on education, healthcare, infrastructure and poverty eradication, that India truly needs. Too long has the shadow economy kept the nation back, as bribery and tax avoidance, became part of the national character. It is time that the soft state economy, face a hard reality, that its time has come. The Indian economy is growing and will continue to grow for decades, and it is up to its government, to come up with enlightened economic reforms.

My hope is that the Indian populace and its leaders, continue to find the means to improve the joy of their citizens. There is enough work to do for the next century, and level headed down to earth leadership, is required for progress. This government at least has ideas, and is risking its future, in carrying them out.  It is time to change all that old ‘normal’ and break through to the new reality of increased productivity and ease of doing business. Thank god there are some much needed leaders, who are ready to sacrifice their people to hardship and inconvenience. Let us see what the next budget lays out, as it may be one of the more important ones, in a long time. We need some hard decisions and stronger actions, to continue to make the foundation, for the twenty first century where finally India emerges as a great nation. Henry Miller once said “One has to be a lowbrow, a bit of a murderer, to be a politician, ready and willing to see people sacrificed, slaughtered, for the sake of an idea, whether a good one or a bad one” -Henry Miller, writer (26 Dec 1891-1980)