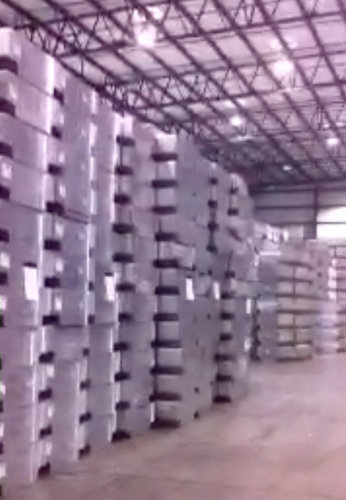 As I sip my chilled light beer bought on sale at the local Walmart; I think of the 90 billion other such aluminum cans, which will be used in the US this year alone. We look for bargains and try to save money on a daily basis; but unknown to me I am paying Goldman Sachs for the privilege of storing 1.5 million tons aluminum at their Metro company, which is increasing the price of each sip I take. The next step is going to be the buying up of 80% of the supply of copper (a much more essential commodity); by financial behemoths like JP Morgan, Goldman Sachs and Black Rock. Who let these top dogs out into these areas, are the misguided policies of recent libertarian-ism. For example multiple petitions from the top paid lawyers and economists wore down our very own regulator Mary Shapiro of the SEC, to allow the copper deals by big banks. Wealth is now concentrated with such power; that it roars for stabilizing prices and availability, allowing the moneyed to take another small percentage from our daily consumption in the name of free markets and competition.
These small percentages are slowly sucking the money from every single hard working individual and even the poorest of the poor contribute mightily as these small premiums on essentials like oil, aluminum and copper affect each and every one of us. Suddenly the sip of this cheap brew swill seems to turn even bitterer in my mouth; as I just saw that the quarterly earnings of most of these huge financial institutions increase mightily from such legal trading activities. The rich as the saying goes are getting richer, while I realize that my pension has gone the way of the dodo bird. We might as well change the name of Aluminum to Sach’s silver and Copper to Morgan’s gold; as we will be paying a tiny fraction to them, in the long run in any case.

I love free enterprise and the capitalistic society, as it has brought so much development and progress in the modern world. These financial institutions are hallowed and I remember looking in awe at the great chandelier that JP Morgan had installed in his lobby across from the NYSE during the great depression; while I was a young, and not as bright MBA student. The greatest corporations would not be around like GE, GM, IBM, and Exxon without their financing. I wish that they would go back to the business of growing corporations, infrastructure, homes, consumer goods, neighborhood small entrepreneurs to allow free enterprise to thrive, rather than this grubby money grab that is ill conceived and poorly executed. Risk on should be their slogan to encourage entrepreneurs to bring their ingenuity and innovations to the market. JPM took over Thomas Edison’s company and made it into GE when Edison insisted on sticking with outdated DC current; and not the more viable AC proven by Westinghouse, and thereby changing history. He also became the lender of last resort when the markets panicked, based on his real gold holdings. Hope that the captains of these institutions become true financiers of enterprise and growth; instead of the assured bets that make every day commodities more expensive for each of us; and only make the rich richer by hoarding necessities, and misusing the Feds easing policy. Earning quasi rent is easy; and building more rent-able production is hard, yet it remains the right thing to do for the future of humanity, to give the poorest some respite from their plight.